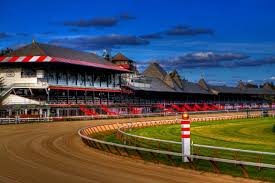 Saratoga Performing Arts Center will pay tribute to the 150th Anniversary of Saratoga Race Course by presenting the World Premiere of an original orchestral composition by Grammy Award winning composer Richard Danielpour on August 8, 2013. The commission, sponsored by Saratoga 150 Committee Chair Charles Wait and his wife Candace, will be premiered by The Philadelphia Orchestra as part of a special concert celebrating the milestone of the iconic race course. The news was announced today as part of SPAC’s “Building of a Season” initiative.

“Saratoga Springs’ owes so much of its remarkable history, development and success to the presence of Saratoga Race Course. The crown jewel of the racing world for 150 years, the track has helped grow Saratoga into a vibrant, unique and culturally rich community; the type of place where Saratoga Performing Arts Center could be envisioned, founded and sustained,” said Marcia J. White, SPAC’s President & Executive Director. “SPAC will mark this historic occasion with a celebratory program by The Philadelphia Orchestra, led by the world premiere of a commissioned work by award winning composer Richard Danielpour.”

“My warmest thanks go out to Charles and Candace Wait for their generous sponsorship of this commission. The Wait Family’s historic connection to SPAC and longtime leadership in the Saratoga community makes their role in this project particularly meaningful,” said White.

“It is a privilege to have the opportunity to create a work that honors the 150th Anniversary of Saratoga Race Course and the history, traditions and culture that are part of that milestone,” said composer Richard Danielpour. “I look forward to the challenge of capturing in music, the essence and vitality of that colorful heritage.”

The Saratoga 150 celebration marks the sesquicentennial of the inaugural thoroughbred meeting in Saratoga Springs in 1863. The four-day program was such a success that founder John Morrissey and his partners built Saratoga Race Course in 1864. Today, Saratoga Race Course is the oldest sporting venue in the country still in operation and was named one of the top 10 sporting venues in the world by Sports Illustrated. The Saratoga 150 Committee, chaired by Adirondack Trust President Charles V. Wait, is planning and organizing a five-month-long celebration from May to September that will feature more than 150 community events for residents and visitors to the region. Historical information and details on the 2013 celebration are available at saratoga150.com.