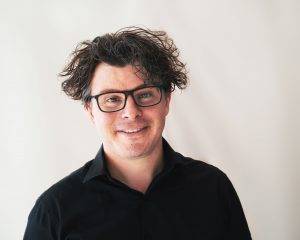 Electric guitarist and composer D. J. Sparr, who Gramophone recently hailed as “exemplary,” is one of America’s preeminent composer-performers. He has caught the attention of critics with his eclectic style, described as “pop-Romantic…iridescent and wondrous” (The Mercury News) and “suits the boundary erasing spirit of today’s new-music world” (The New York Times). The Los Angeles Times praises him as “an excellent soloist,” and the Santa Cruz Sentinel says that he “wowed an enthusiastic audience…Sparr’s guitar sang in a near-human voice.” He was the electric guitar concerto soloist on the 2018 GRAMMY-Award winning, all-Kenneth Fuchs recording with JoAnn Falletta and the London Symphony Orchestra. In 2011, Sparr was named one of NPR listener’s favorite 100 composers under the age 40. He has composed for and performed with renowned ensembles such as the Houston Grand Opera, Cabrillo Festival, New World Symphony, Washington National Opera, and Eighth Blackbird. His music has received awards from BMI, New Music USA, and the League of Composers/ISCM. Sparr is a faculty member at the famed Walden School’s Creative Musicians Retreat in Dublin, New Hampshire. His works and guitar performances appear on Naxos, Innova Recordings, & Centaur Records.

D.J. lives in the mystical high plains of the Wild West with his wife Kimberly, son Harris, Nannette the hound dog, and Bundini the boxer puppy.