Songs from an Unmade Bed is a theatrical song cycle for one performer and three musicians that explores the romantic life of a gay man living in the city. One lyricist and eighteen composers (one per song) combined to create a unique theatrical event that is funny, poignant and ultimately hopeful about love. 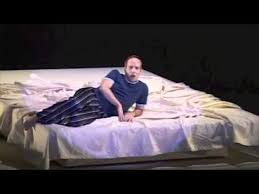 Songs From an Unmade Bed might be one of the best hours not spent in bed. Mark Campbell’s lean style, sly point of view and overall sensibility are entirely his own.
—Variety

Comical and moving…An amusing and entirely unsentimental tableau of single life in the city…Campbell’s lyrics are witty, imaginative and at times seemingly very personal.
—Associated Press

Songs From an Unmade Bed is really meant to be experienced. Though not sweeping and epic as some musicals or rugged and stuffy as some recitals, it is touching and delicate and that is something you don’t see everyday.
—EDGE, Los Angeles

To inquire about the rights to perform Songs from an Unmade Bed, please fill out a quote request here.