Bunch writes about the Symphony: “In 1879, the Smithsonian Institution created the Bureau of American Ethnology, an ambitious field research program to preserve a record of the native cultures decimated by a century of conflict and oppression. Ethnomusicologists and anthropologists working for the BAE spent months at a time on Native American reservations, painstakingly recording and notating tribal folk songs and translating their uncredited texts and poetry. Abstracted from their original voices and ceremonial use, these terse, plain-spoken texts offer timeless wisdom and emotional insights that feel hauntingly relevant in today’s precarious times. 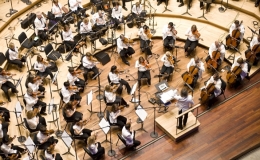 Symphony No. 3: Dream Songs is a song cycle scored for full orchestra and chorus, adapted from these translations, (particularly the work of Frances Densmore). I organized the eight songs of the cycle into three parts: songs of anxiety and unrest, songs of war and its aftermath, and ultimately, a prayer of healing.”

At ca. 40 minutes, it represents a major new work for Bunch and is one of many large-scale works the composer is creating over the next 2 seasons.