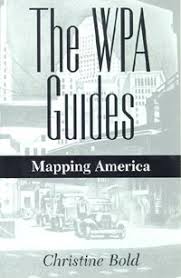 Commissioned by the Orpheus Chamber Orchestra for their 40th anniversary, Gabriel’s Guide to the 48 States is a tribute to the New Deal’s W.P.A. project. Compiled from text in the American Guide series, a collection of guidebooks that were commissioned to provide employment for writers during the depression, they provide a fascinating picture of America by some of its best writers. Scored for baritone and chamber orchestra (Flute/Piccolo, Oboe/English Horn, 2 Clarinets/Bass Clarinet, 2 Bassoons, 2 Horns, Trumpet, Trombone, Percussion, Electric Guitar/Banjo Strings) the work is 45 minutes long. The text is compiled from the American Guide Series and the Sacred Harp hymn “Marlborough.” The world premiere performance was given at Dartmouth College on April 19, 2013. Orpheus will give the New York premiere on April 27 2013 at Carnegie Hall.