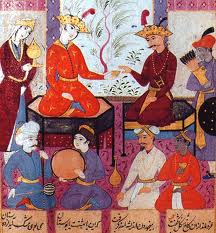 A new work for narrator and orchestra commissioned by the London Philharmonic Orchestra and City University London as part of the BrightSparks series, Prince Zal and the Simorgh marks a new direction in unusual canon of David Bruce’s works. Besides the standard orchestral instrumentation, Bruce employs a battery of Iranian percussion and a large Daf ensemble (a type of Persian frame drum).

In the story, written and narrated by Sally Pomme Clayton (based on a story from the old Persian epic poem “The Shahnameh”) King Sam abandons his white-haired son on a deserted mountain, but it turns out the mountain is home to the magical bird, the Simorgh, who looks after the baby Prince Zal and raises him. Sixteen years later, King Sam’s life has been lonely and miserable, and he sees the error of his ways. He comes to the mountain to pray for his sons forgiveness, and is astonished to see a white-haired boy jumping across the rocks. Zal tells the King the mountain is his home and he can’t leave his mother—but then the Simorgh appears—and that’s where we pick up the story.