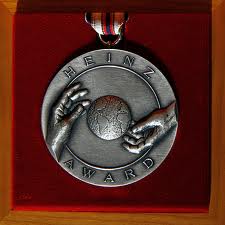 At the age of 35, Mason Bates is one of the youngest recipients to ever receive the prestigious Heinz Award, announced in September by Teresa Heinz and the Heinz Family Foundation. The award recognizes Bates’ unique talent for expanding the range of concert music, blending a brilliant gift at orchestral writing with tasteful use of electronica.

“Mason Bates illustrates what can happen when a truly talented artist dares to stretch and even reinvent the boundaries of an art form. By merging symphonic orchestration with electronic sound and tackling broad creative themes, he is breathing new life into orchestral music and translating it for a new generation,” Teresa Heinz, chairman of the Heinz Family Foundation, said today. “Tinkering with an art form as sacred as classical music requires a level of skill and audacity that few possess and fewer still can pull off, but that is precisely his genius. He brings a joy and exuberance to his work that is expressed through both his compositions and his commitment to mentoring the even younger composers coming up behind him.”

About the Heinz Awards Established by Teresa Heinz in 1993 to honor the memory of her late husband, U.S. Senator John Heinz, the Awards celebrate the accomplishments and spirit of the Senator by recognizing the extraordinary achievements of individuals in the areas of greatest importance to him.

The Heinz Awards, administered by the Heinz Family Foundation, recognize outstanding individuals for their contributions in the areas of: Arts and Humanities, Environment, Human Condition, Public Policy, and Technology, the Economy and Employment.

Nominations are submitted by an anonymous Council of Nominators and are reviewed by Jurors appointed by the Heinz Family Foundation. Award recipients are ultimately selected by the Board of Directors.