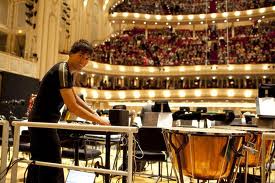 October brought the Chicago Symphony Orchestra to Carnegie Hall to open the 2012-13 season. Featured was Mason Bates’ Alternative Energy, led by Ricardo Muti with the composer performing the electronica part. Premiered last February in Chicago to rave reviews, the work has toured throughout the U.S. and will be given its Canadian premiere in February by the Toronto Symphony.